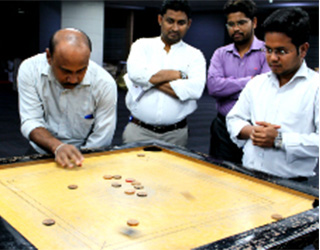 after 24 teams battle it out for 3 days with 27 rounds of games, two teams qualified for the finals of the Double Carrom tournament held at the Kolkata office. The team consisting of Pradipta Chakraborty and Suvendu Das emerged winners while the other team, consisting of Arun Mahapatra and Goutam Das, emerged the runner up.